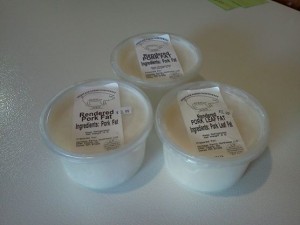 If you would like to order lard or leaf lard please click the link below and go to our online store! Sorry we do not ship our regular pork cuts; just lard.

We can ship up to 10  pint tubs anywhere in the US for about $30 in shipping costs.    We ship exclusively with USPS. They generally do a great job and have the most affordable shipping prices, not to mention we don’t have to drive 45 minutes one way to get to one of their locations., just 5 minutes down the road and your lard is on its way!

If you run into any problems ordering online please let us know and we will help you out from our side of things. The online store is new for us and there may still be a bug or two to work out.  The online service will notify us of your order and we will ship it out on our next shipping date which is almost always Mondays and Tuesdays of each week.

We offer ready to use lard and leaf lard in 1 pint tubs that weigh about 14 oz each. The raw fat comes exclusively  from our pasture raised Red Wattle hogs. This is old fashioned lard which means it is non-hydrogenated and has no added stabilizers. There is nothing in there but the pure, rendered lard. Our lard should be refrigerated or frozen for best quality. It will last for many months in the fridge and up to a year or more in the freezer.

Leaf lard is made from the fat surrounding the kidneys and other organs of the hog. The leaf lard is considered to be the highest quality fat from the hog, with a high smoking point and a neutral flavor.  If you are making pie crusts or pastries, this is the stuff for you. Yes, of course you can use it for all other cooking needs (general baking, frying, etc) though it really shines in the pastry department.

Regular lard is made from the back fat and other odd bits of fat from the hog and is well suited for general frying, sautéing, biscuits, rolls, tortillas and any other item that calls for lard or shortening. You can swap lard for shortening in any recipe and you’ll be delighted with the results.

Long ago lard was always in the kitchen. It was the “go to” fat for all things cooking. Then along came the commercially produced shortenings and the claims that lard was “bad” while shortening was “good”. It wasn’t long before lard was less and less utilized and then it was almost gone. Recently, science has shown that in fact, lard is not that bad after all,  and in fact, it can be a rather healthy part of your diet; in particular lard from pasture raised hogs that are free of antibiotics, feed additives and other growth stimulants. Lard from pasture raised hogs is higher in vitamin D and other important nutrients.

How to Order Meat

Just select the products you want and send us an email to order. We do not have an online store.

Connect with us online